Take advantage of your camping holiday in the Landes to visit Dax. A spa town known since Antiquity, as famous for its thermal baths as for its Gallo-Roman heritage, its bullring and its féria, Dax never ceases to surprise its visitors. What to do in Dax? Here are the must-sees in the "City of Waters"! 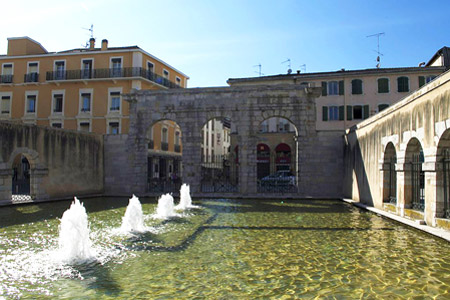 A city renowned since Antiquity

Situated 40 km from the Eurosol campsite, Dax is an ancient Roman city with a history dating back two thousand years. The ancient capital of Chalosse knows how to mix styles, eras and cultural influences: the Gallo-Roman ramparts, the 17th and 18th century buildings, the Art Deco buildings, the Andalusian-inspired bullring or the street-art frescoes in the inner city give a unique character to the spa town.

The jewels of Dax's heritage

Dax is one of the oldest towns in the Landes, founded by the Romans around the 1st century AD under the name of Aquæ Tarbellicæ. Labelled a Town of Art and History, Dax is home to an important Gallo-Roman heritage. Starting with the ramparts, built in the 4th century. Originally 8 to 10 metres high, they encircled the heart of the town and were flanked by 38 watchtowers. The most visible Gallo-Roman imprint is located on the side of the Place Saint-Pierre and the Théodore Denis park, which runs along the river to the arena.

You should also visit the archaeological crypt, a treasure "hidden" in the bowels of Dax. These are the remains of a Gallo-Roman civil basilica dating from the 1st or 2nd century AD. A secret visit to be completed with that of the Borda Museum, dedicated to the archaeology and history of Dax. Dax also has a remarkable religious heritage. The Cathedral of Notre-Dame and its superb Gateway of the Apostles; the church of Saint-Vincent-de-Xaintes which contains a splendid 5th century mosaic.

We then go back in time to the 1920s to discover the Art Deco monuments that adorn the banks of the Adour: Jean Nouvel's Thermal Baths, the Splendid Hotel and the Atrium auditorium take visitors back to the Roaring Twenties.

Built in 1913 by the architect Pomade, the Dax bullring is one of the most important in the Landes. The Andalusian style is reminiscent of the great plazas of southern Spain (Seville, Cordoba, Granada...). The bullring can accommodate up to 8,000 spectators who come to watch bullfights, Landes races and other traditional bullfighting games.

The bullring can be visited all year round. This is an opportunity to discover the bullfighters' route "backstage", the patio of the caballos or the chapel where the bullfighters meditate before entering the ring. Further on, the statues of the Toro echo the Dax bullring and bullfighting, a tradition that has been anchored in Dax for centuries.

The Fontaine Chaude: symbol of the spa

Dax is the leading spa destination in France with almost 60,000 people taking the waters every year. It owes its reputation to its naturally warm thermal waters. In the town centre, at the foot of the Sarrailh thermal baths, the Hot Fountain - or La Nèhe spring - is the symbol of Dax's thermal baths... and a real tourist attraction. And for good reason: the beneficial water gushes out here at 64 degrees! This thermal water, mixed with the algae that forms on the surface and the silt of the Adour, is used to make the famous mud of Dax, called Peloid. Already known to the Romans for its therapeutic virtues, this thermal mud is used in rheumatology and phlebology, notably to treat arthritis.