There is nothing like Landes cuisine to warm up the mood. Among the best known and most appreciated specialities, the garbure holds a special place in the traditional gastronomy of the South-West. A dish that smells of winter and that pleases all palates! 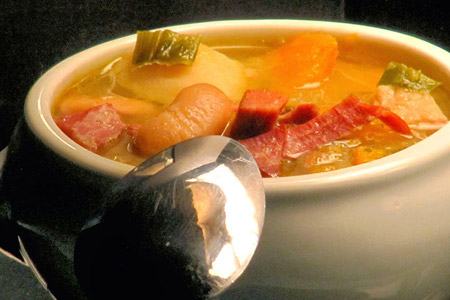 A dish that is both poor and rich

Garbure, or garbure soup, is a traditional soup of the Landes cuisine. Similar to potée and pot-au-feu, this emblematic dish of the Landes de Gascogne and Béarn is prepared with vegetables, cabbage, white beans and confit duck meat. The term garbure comes from the Gascon word "garbe", which means "stew". But in the Landes, garbure is much more than a simple stew!

A rustic, economical and nourishing dish, the Gascon soup was for a long time the only meal for the poor, with only a few potatoes, green cabbage, carrots and a slice of bread. Meat was much rarer, often chuck or pork shank.

Over time, the old Landes recipe has been enriched with more varied vegetables and, above all, duck confit! Garbure became part of the French culinary and gastronomic heritage after the Revolution, and today it is cooked by the greatest chefs, and each Landaise family has its own recipe. There is even a World Garbure Championship held every year in Oloron-Ste-Marie, in the neighbouring department of Pyrénées-Atlantiques.

Do you dream of preparing a real garbure the old-fashioned way? Here is an easy and traditional recipe to make a success of this peasant soup emblematic of the Landes cuisine.

The mixture should be thick. Do not hesitate to prolong the cooking time. In a good garbure, the spoon should stand upright! In summer, the vegetables can be more varied: beans, peas, green beans. As for wine, the garbure from the Landes goes perfectly with a dry red wine such as Tursan, but also a white wine from the Coteaux de Chalosse.

Are you a poor cook? Take advantage of your holidays in Vielle-Saint-Girons to push the door of the Maison des Paysans Landais . At the foot of the Vielle water tower, this producer's shop offers a wide choice of local products. Starting with home-made garbure preserves. You can also find all sorts of preserved duck and foie gras, pork specialities and organic beef, cheeses, honeys and products from the beehive, Gascony wines, floc, armagnac...