Between Castets and Léon, in the south of the Landes, 15 km from Camping Eurosol, Saint-Michel-Escalus offers its visitors a concentrate of history, culture and nature. Here are the essential things to see and do in this small Landes village where sport and relaxation go hand in hand. 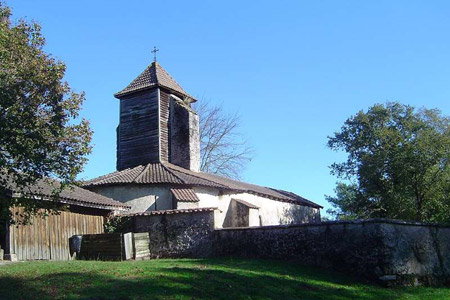 Saint-Michel-Escalus is a small Landes village of some 300 inhabitants located in the Marensin region, on a coastal strip running from Contis to Soustons. Surrounded by forests, the village developed from two former boroughs, Saint-Michel and Escalus, which merged in 1790.

The discovery of funerary urns, vases, weapons and coins attest to the fact that the site has been occupied since antiquity. In the 14th century, Saint-Michel was part of the barony of Marensin administered by the lords of Albret. At the end of the Hundred Years' War, the village experienced a period of prosperity and became the chief town of the barony, with more than a thousand inhabitants. From its past, the village has preserved a rich historical heritage: churches, old Landes houses, fountains, mills, airials take visitors back in time.

The church of Saint-Michel d'Escalus

Built on top of a hill between the 13th and 14th centuries, the church of Saint-Michel is a building of Romanesque origin. A listed monument, the church has a square porch bell tower. The defensive architecture is underlined by loopholes and massive buttresses. Inside, above the high altar, one can admire a reproduction of Raphael's famous painting "Saint Michael overcoming the devil or the Great Saint Michael", as well as a remarkable old pulpit made of solid wood.

The church of Saint-Pierre

Located in the heart of the hamlet of Escalus, the church of Saint-Pierre has an unusual history. In order to protect it from the flooding of the Léon pond, it was dismantled in 1756 and rebuilt in its present location. From the old site, on the edge of the road to Léon, the well of Saint Pierre remains, which was in the middle of the church at the time.

Quad biking in the Landes forest

In the forest of Saint-Michel-Escalus, the Parc de loisirs Rando Quad Landes offers you a unique experience at the controls of a 150cc quad on a private site of 30 hectares around the Galoppe mill. Experienced pilots will embark on a course that mixes speed and technique: climbs, accelerations, descents, slopes, mud, obstacles, streams... Sensations and escape guaranteed!

Canoeing down the river La Palue

From the Saint-Michel-Escalus water sports centre, go canoeing on the river "La Palue" which feeds the Léon lake. In the meanders of a luxuriant gallery forest classified Natura 2000, adventure is within paddling distance, close to exceptional fauna and flora.

If you are staying in camping near St Michel Escalus in September, don't miss the Tuc de Saint-Michel festival which is traditionally held on the weekend of Saint-Michel's Day (around 29 September). Share a moment of conviviality and festivity in the pure Landaise tradition by tasting a typical meal: omelette with chilli and chicken with onions!

Has Saint-Michel-Escalus revealed all its secrets to you? Then take a walk around the neighbouring Landes villages of Castets, Linxe, Léon and Vielle-Saint-Girons.