Away from the main roads and tourist routes, 20 km north-east of Dax, Rion-des-Landes is a quiet and welcoming village which is well worth a visit. Nestled in the heart of the Landes forest, the small Landes village has its share of heritage sights that never fail to surprise visitors. What to do and see in Rion-des-Landes? Follow the guide! 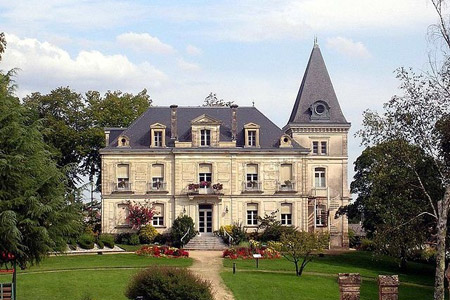 Rion-des-Landes, the charm of a small village in the Pays Tarusate

30 minutes from the Atlantic Ocean and the EUROSOL campsite, in the cultural country of the Grande Lande, Rion-des-Landes is a peaceful village of 3,000 inhabitants hidden in the heart of the Landes de Gascogne forest. If the name doesn't ring a bell, you should know that this is the birthplace of Maïté, the famous cook and TV presenter of the famous show "La cuisine des Mousquetaires". But beyond this little anecdote, the Landes village has many curiosities surrounding a unique and little-known heritage.

The Bellegarde castle, the park and the Saint-Jean fountain

This magnificent neo-classical castle was built by a rich industrialist from Rion, Jacques Maque, who made his fortune through the pine resin trade (the Landes practice of gemmage). Built in 1838, the Bellegarde castle now houses the town hall of Rion-des-Landes. In the park of the castle stands a beautiful bandstand from the early 20th century. Running alongside the Bellegarde park, the Maubay stream offers a natural and bucolic setting for a pleasant walk. You can discover a miraculous fountain, renowned for its mineral and ferruginous water which is said to cure skin diseases and warts.

The Crouts Arramère (or "cross with branches") is a monument whose meaning is still unknown. This atypical building, probably dating from the 15th century, forms a curious Gothic porch with four pillars and arches. Its origin and original function remain a mystery. Some have seen it as the entrance to a cemetery around a vanished chapel or the guardhouse of a sacred fountain. For others, it is an ancient baptistery. The most romantic think that it is the tomb of a lord of Albret who fell during the battle against the English at Tartas.

Of Romanesque origin, the church of Rion was rebuilt and fortified in the 16th century. It has preserved a magnificent 12th century sculpted portal, one of the most beautiful in the Landes. The ensemble is dominated by a solid bell tower with a stone spire, which houses the oldest bell in the department.

The arenas of Rion

The present bullring of Rion, tinted red and orange, was restored in 1930 to the plans of the architect Brana, with a capacity of approximately 2,500 places. Today, novilladas, Landes races, bullfights and other bullfighting shows are still held, particularly during the Saint Bartholomew's Day celebrations (August) and the traditional fiesta campera of Rion-des-Landes (November).

The tree of freedom

Between the church and the town hall of Rion-des-Landes, along the stream of the Post Office, the park of the Town Hall has magnificent trees, lime trees, maples, elms and hundred-year-old oaks. On 4 May 1848, after the fall of King Louis Philippe and the proclamation of the Republic, the first Liberty Tree was planted at the request of the people of Rionn. Since then, in keeping with the republican tradition, it has been customary to plant a "May tree" as a symbol of renewal. A second tree was planted in 1889 for the centenary of the Revolution, a third in 1948 to celebrate the advent of the Fourth Republic. The tradition continues.

Not far from Rion-des-Landes, you can also discover the Arjuzanx nature reserve, the largest sanctuary for grey cranes in France.