In the Landes forest, there are wild boars, deer, roe deer and...dinosaurs! On the edge of the Lac d'Azur, near the EUROSOL campsite, a theme park offers you a dive into the world of "Jurassic Park". 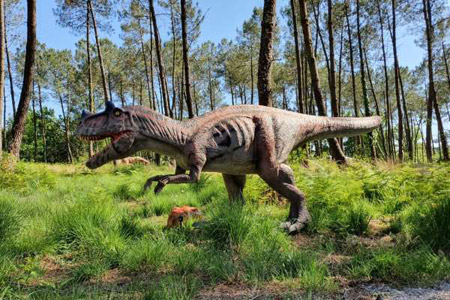 Jurassic Park in the Landes

Are your children fans of Jurassic Park and dinosaurs? Take them to Dinosaurs Park! Created in 2016 at the edge of the lake of Azur in the Landes, 30 km from the EUROSOL campsite, this amusement park invites you to live an original adventure with your family, with more than 25 attractions and 3 universes to discover: dinosaurs, dragons and the playground.

The Landes forest is the ideal backdrop for going back in time to the Jurassic era when dinosaurs ruled the earth. Under the pines, between the ferns, a dozen or so of these ancient reptiles have found refuge in the park and some come to life as you pass.

In the top 5 of the most famous dinosaurs, we find the T-Rex, the triceratops and the velociraptor, of course, but also the ankylosaur and the brachiosaur. In front of each giant lizard, an explanatory panel gives more information about the animal. Not to be missed: in a prehistoric stone hut, the Ciné Dino shows a short, fascinating documentary film about the dinosaurs that lived at the end of the Jurassic period, around 150 million years ago.

If your children love the adventures of Hiccup, Toothless and their Viking friends, then it's a safe bet that the Dragon Forest will amaze them. Imagine yourself in a magical forest, in an ancient time, where humans and Dragons

Today, these enchanted monsters are back in the Landes. You can discover them at Dinosaurs Parc. A trail takes you to meet these creatures with the body of a snake, the legs of a lizard, the claws of an eagle, the mouth of a crocodile or the wings of a bat.

If you are looking for activities to do with the family, with the children, Dinosaurs Parc offers great possibilities. The Landes leisure park offers many games, rides and attractions for all ages.

On site, children can have fun on a dozen inflatables, trampolines and small rides such as the dino rodeo, the caterpillar train and the spinning cups. It is also possible to play the apprentice palaeontologist on a treasure hunt in the park. An archaeological excavation workshop is available for children, with brushes in hand, to find dinosaur bones.